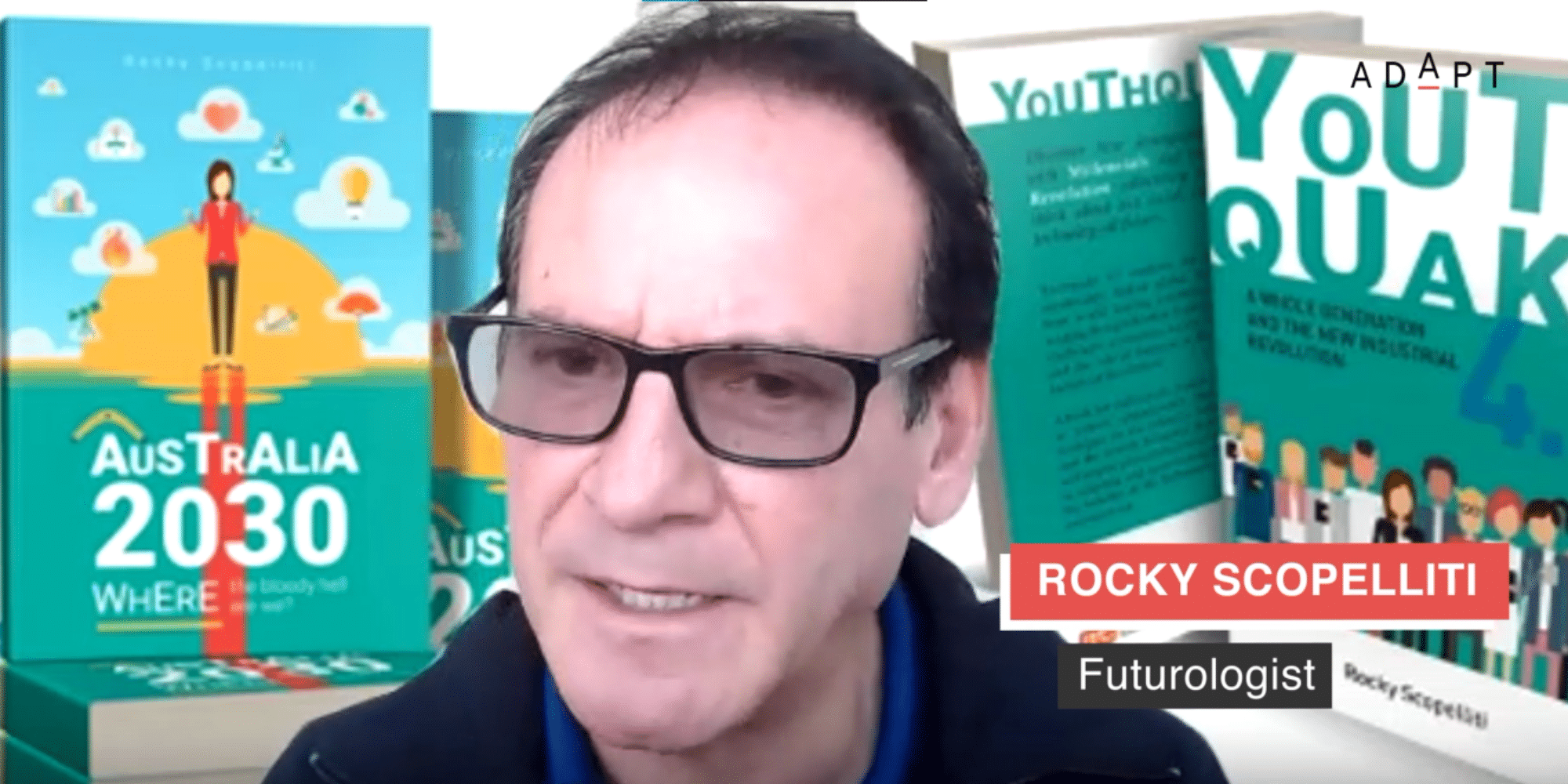 Futurologist Prediction: Cyber Security Technologies Will Be the Biggest Disruptor to Australian Organisations 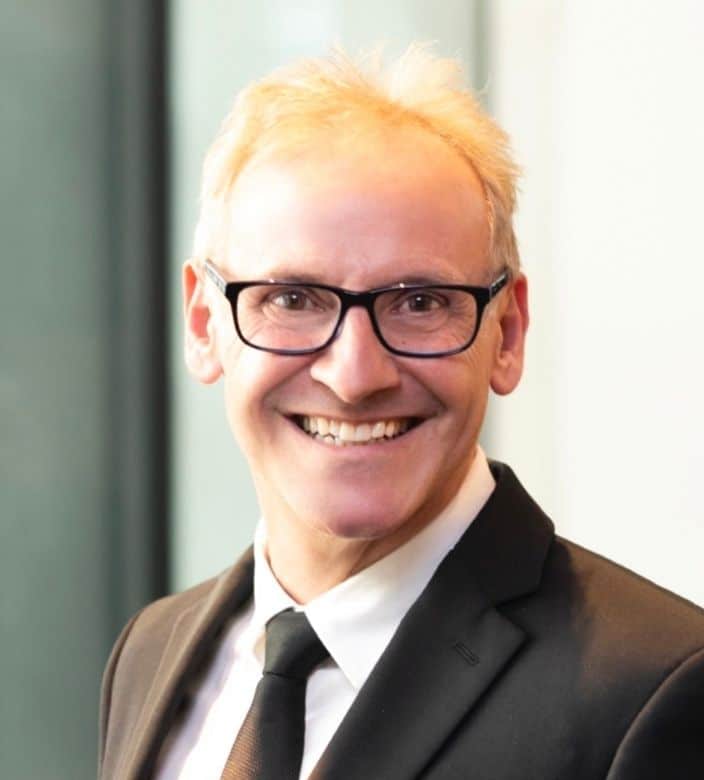 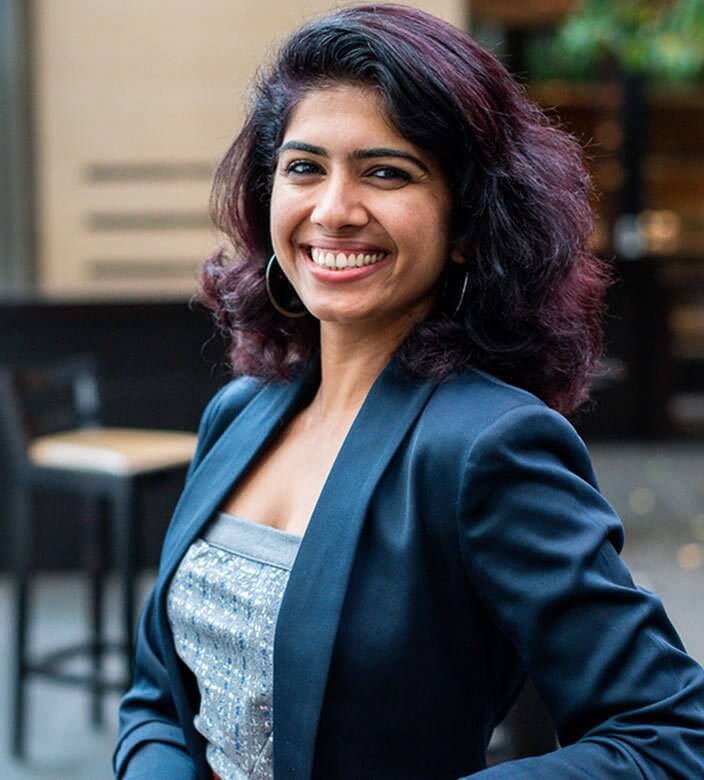 In the lead up to his presentation at ADAPT’s Data Edge, Futurologist, Rocky Scopelliti, discusses his predictions for 2030 based on his study of 673 Australian professionals as organisations pivoted to hybrid operations.

Speaking to ADAPT’s Senior Research Strategist, Aparna Sundararajan, Rocky outlines how the Fourth Industrial Revolution will impact the future of working for organisations. The most pressing issue for Australian organisations will be their cyber security in an increasingly hyperconnected and regulated digital world.

Rocky explains how this will be actualised through risk and security functions directly reporting to the board and increasing dependence on data as an organisational asset. Not only will digital literacy be required by Australia’s workforce, but data proficiency will become paramount.

In this interview, Rocky asserts that out of all emerging technologies, cyber and information security technologies will have the greatest impact on organisations within the next three years. This is followed by big data, APIs, and artificial intelligence.

Welcome and very excited for your session, but for our audiences, who are mostly Chief Data Officers, Data Analytics Heads, Heads of Data Engineering and Architecture, what will your session be? What is it going to touch upon?

Well, we’re going to talk about the decade ahead, and I’m excited to share with the audience the results of a very comprehensive study that I conducted that involved some 700 professionals. Still, importantly, it also included about 170 CEOs and directors of boards.

The central question of the research was really how do we feel about the decade ahead. Now what’s fascinating is the significant level of optimism that I would say Australian professionals have when we look at the decade ahead.

The reason why this is fascinating is that the decade ahead is all about the Fourth Industrial Revolution.

The Fourth Industrial Revolution will bring significant, disruptive change across all aspects of how enterprises, industries, and nations compete and work.

This is where we need to think about technology differently from how we’ve done it in the past. That’s essential because we’re living in an exponential world, a world that is characterised by a change in a very, very different way from the decade past.

We’re then going to talk about trust. What I look forward to sharing is this idea that I’ve been researching now for quite some time, is that when we think about trust in the coming decade, we need to shift the question beyond thinking about who do we trust onto the question of what do we trust and in a hyper-connected world where our cities are hyper-connected, that will increase having connectivity of devices from probably 3 or 4 today to, to about 20 by 2025.

We need to think quite differently about security in a hyper-connected data-intensive world. That leads me on to the conversation of data. We need to have a very different view and approach to data because we’ve left this as initially until the last part of our transformations.

That’s left vulnerabilities in many organisations that perhaps they didn’t have in the last decade, particularly around regulatory reform, the GDPR, for example. For those organisations that are dealing with or trading in the European Union and located in Europe.

With open data here in Australia, we can expect a greater level of interest from regulators in data this coming decade. Lastly, I look forward to sharing some predictions with the audience about the decade ahead and put that into a context that will help them think about security in a completely different way.

If we look at how risk unfolded functionally in an organisation in the last decade, it evolved to a point where it now has a direct line into the board and operates in a very different way compared to where we began the decade before.

I predict security but will evolve to the same level of independence and reporting directly through to the board, but perhaps not in the same sense as risk.

What we will see emerge as organisations become increasingly dependent on data that we’ll see a subcommittee of the board emerge under the title of data and security is inextricably linked.

We’ll see boards becoming much more directly involved in the areas of data, the protection of data privacy, all of these matters. We’ve got to progress beyond thinking about literacy in terms of digital literacy has been the goal.

We’ve got to move beyond that to data literacy because the way we think about every role in the organisation today and this coming decade will require proficiency in data. The way we will see data, and we will see this decade, data and security merging augmenting or coming together.

That will principally be centred around the protection of that data and from a hierarchical security perspective.

That’s because organisations are increasingly becoming accountable to regulators, communities and citizens in relation to the data, the use of the data, and the protection of the data and the like.

There’ll be less tolerance of that, of the protection of that data, use of that data, which will manifest itself from a security perspective.

From my perspective, I started tracking data about 10 years ago, back in 2008, with the advent of cloud computing. We started with data’s glorious and glamorous role in terms of data analytics, text analytics, sentiment analysis, and analysis, and NLP what it can do for customer fronting product development, innovation, and customer service and support.

We’ve realised that we need a much more holistic and in-depth understanding of a staged approach of one, what is our data governance, ownership, accountability about retention- and that’s what I hear from you.

That’s what I’m hearing from the Chief Information Technology Security Officer at PayPal that I spoke with and another person I spoke with today around security. We’re thinking about data in that sense of governance.

Then we’re talking about data in the sense of internal operational data, and then comes the data analytics. For audiences, it’s going to be a massive understanding of how you tie your role with the role of other people who will be involved in different stages of data.

Every stage of the life cycle of the data journey, but perhaps have an owner who would be different from the Chief Data Officer or Data Analytics. It’s going to be spread out. Is that what I hear from you, is my understanding correct?

Absolutely. You’re spot on there, Aparna. The grounding or the binding approach or thought there is, if you start looking at data as an asset, your ability to connect all of the moving parts associated with that asset will become much tighter and much more integrated.

The problem that we’re seeing, at the moment, as I mentioned before, is that we’ve many organisations that have left their data transformations up to the last part of their transformations.

We’ve got to start somewhere, but essentially as organisations compete on data.

The role of data in the organisations as it does in our literacy becomes even more important to the point where we will see this coming decade by recognition and acknowledgement of data as an organisational asset.

When we look at our assets, how we protect our assets takes on a completely new meaning. That’s where, again, this will be security-led. It’ll be cyber by design rather than coming up from the foundations of data competencies as we have today.

Wow. That’s very, very insightful, Rocky. Now, you’ve been a futurologist, and futurologists provide us with a lot of hope and an exciting sneak peek into the future, but with our current day being uncertain. Still, us being in lockdown, and we don’t know what’s going to happen a week after; how do you work with your predictions, and how do you account for these seasonal or uncontrollable variables?

We live in a world of increasing uncertainty.

When we think about that, that comment then survival for any organisation, this coming decade is going to be principally based on its capacity to adapt to a world of accelerated change, whether that change is as a result of a global event as we have with COVID or for a variety of other the things, disruptors.

Then the organisation can pivot or adapt when that happens, which will define its success. Adaption is the key here. We saw that across industries when COVID first hit our shores back in March last year because we saw many organisations who could respond so effectively by putting tens of thousands of workers out there to perform their roles in a distributed model.

We saw other organisations that simply couldn’t. I suspect that the clue in why those organisations were able to adapt versus those who couldn’t or weren’t as easily able to is in the word resilience.

We saw in the last decade the pursuit of productivity and efficiency, perhaps at the expense of resiliency.

When the change occurred, those organisations who still had resiliency in their technology in their systems processes and all of that stuff were probably why they could respond so effectively versus those who didn’t.

We can see more of that this year, Aparna. We’re going to see the pendulum perhaps swing a little further back to incorporate resiliency to uncertainty this coming decade, opposed to what we saw in the last decade.

What’s fascinating about the research that I’ve done is that it clearly shows that when it comes to thinking about one of the most disruptive things that will come at organisations, cyber information security was number one this coming decade.

That was number one over and above emerging technologies, such as artificial intelligence, blockchain, data, and the like. I would say that Australia’s industries and enterprises will be cyber first, and I anticipate that in the Fourth Industrial Revolution, that will be cyber by design.

Thank you so much, Rocky. That’s very insightful and hopeful. We’re looking forward to your keynote at the ADAPT Data Edge.

Futurologist, Rocky Scopelliti, will be presenting his predictions on Australia’s socioeconomic and technological future at ADAPT’s Data Edge in 2022.